***This recipe is especially good with stuffed olives. My favorites to use are ones stuffed with blue cheese, garlic, and jalapenos.***

Can of apple pie filling 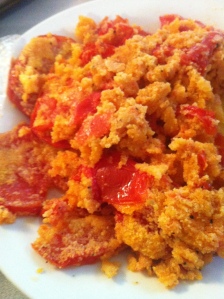 Preheat oven to 350°. Open, rinse, and drain 4 cans of lima beans. Combine beans in a bowl with 1 1/2 cups of brown sugar, 1 cup of ketchup, and 1 chopped onion. Transfer to a greased baking dish. Dice 3 uncooked bacon dish and sprinkle on top of beans. Bake, uncovered, for 1 1/2 hours.

Preheat oven to 375°. Unroll 3 tubes of refrigerated crescent rolls and separate (or cut) into 24 triangles. Make 12 squares by pressing the seams of 2 triangles together and rolling into shape. Place on an ungreased baking sheet.

Spoon 1/4 cup of cherry pie filling in one corner of each square. Fold to make triangles. Pinch to seal. Bake for 10-12 minutes. Mix 1 1/2 cups of icing sugar with 3-6 Tbsp of milk. Use 3 Tbsp if you want a thick icing to make designs or squiggly lines with. Use 6 Tbsp if you want to use as more of a glaze to brush over pastries. Serve warm.

Bison burgers with cheese and bacon

Craft services for a film set cast and crew.

I bought most things in bulk at Costco. There are a TON of leftovers, but if I wouldn’t have bought in such large portions then I would have paid the same amount if not more for half the ingredients so it seemed worth it.

I’ve posted this recipe before so here is the link: https://theshortchef.wordpress.com/2014/08/10/orange-pecan-salad/

I bought a box of mandarin orange cups – like the kind you put in kids’ lunches. I put 12 aside for salads and then put the rest out for the crew to eat. Instead of pecans, I tossed in toasted whole almonds, pistachios, and a mix of sunflower seeds, pumpkin seeds and dried cranberries. The mix is called Salad Topper, which I got from Costco. I also bought a box of individual yogurt cups, put aside the peach/mango flavors for salad dressings, and put the rest out for eating.

Cut 7 small zucchinis and 2 eggplants into 1/4 inch slices. I usually use yellow summer squash instead of eggplant, but they must be out of season because I couldn’t find any. Place in two greased shallow baking dishes. Sprinkle with salt and pepper. Top with 4 cups of mozzarella cheese and 1 cup of Parmesan cheese. Broil 4 inches from the heat for 7-10 minutes. Serve immediately. Doesn’t make great leftovers.

Coarsely chop 1 lb or 4 cups of pecans. In a heavy saucepan, heat 2 cups of milk chocolate chips, a can of sweetened condensed milk, and a 7 oz jar of marshmallow creme just until melted. Stir until smooth. Be prepared for the mixture to be quite thick.

You’ll have to act relatively quickly and stir often to prevent mixture from burning, so immediately dip marshmallows, one at a time, in chocolate mixture. I used a fork because i don’t have tongs, but those would probably be easier. Shake off excess chocolate. Quickly roll in pecans. Place on waxed paper-lined baking sheets. I didn’t actually have wax paper so I used aluminum foil and sprayed it generously with vegetable spray and it worked fine. I kept the pot on the stove with it on low heat to keep it warm and easier to work with, but if it’s too hot to handle this way, you may have to throw it in bowl and then reheat it every once in a while. When all the puffs are on the tray, refrigerate until chocolate is firm. Store in the refrigerator in an airtight container.

Slice up 8 bananas. Drizzle with chocolate sauce and a handful of pecans. Garnish with Cool Whip.

In a small saucepan, melt 5 oz of Cheez Whiz and 3 Tbsp Golden Crisco. Stir until blended. Pour into a well-greased bundt pan. Cut each biscuit into quarters and place over cheese mixture.

Bake at 400° for 12-14 minutes. Immediately invert pan onto a serving platter and remove. Normally I sprinkle with 2 Tbsp of minced fresh parsley but I went to 2 stores and neither had any so I settle for the fresh parsley paste they sell in the produce section. So I brushed the hot bread with 2 Tbsp of parsley paste and then with 4 strips of cooked and crumbled bacon. Serve bread warm.

Stir 2 cups of Bisquik, 2/3 cup of milk, and 1/2 cup of shredded cheddar cheese in a bowl just until moistened. Drop by tablespoonfuls onto an ungreased baking sheet. Mix 2 Tbsp melted butter and 1/2 tsp garlic powder. Brush over biscuits. Bake at 475° for 8-10 minutes. Serve warm. 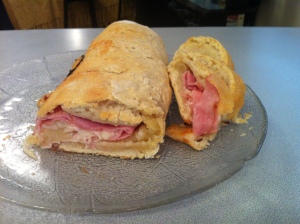 It seems like a lot. We’re 2 people and we easily eat 2 loaves in a week. You can freeze one or two loaves or give them away to neighbors or as gifts or bring to the next function you go to. Everyone loves banana bread! Just make sure to warn people that it contains nuts! 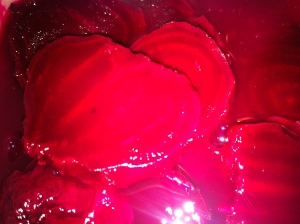 2-4 beets, depending on size

Combine in a blender until smooth and enjoy!